303 Magazine sat down with four models new to DFW to discuss how they got here and what’s next. 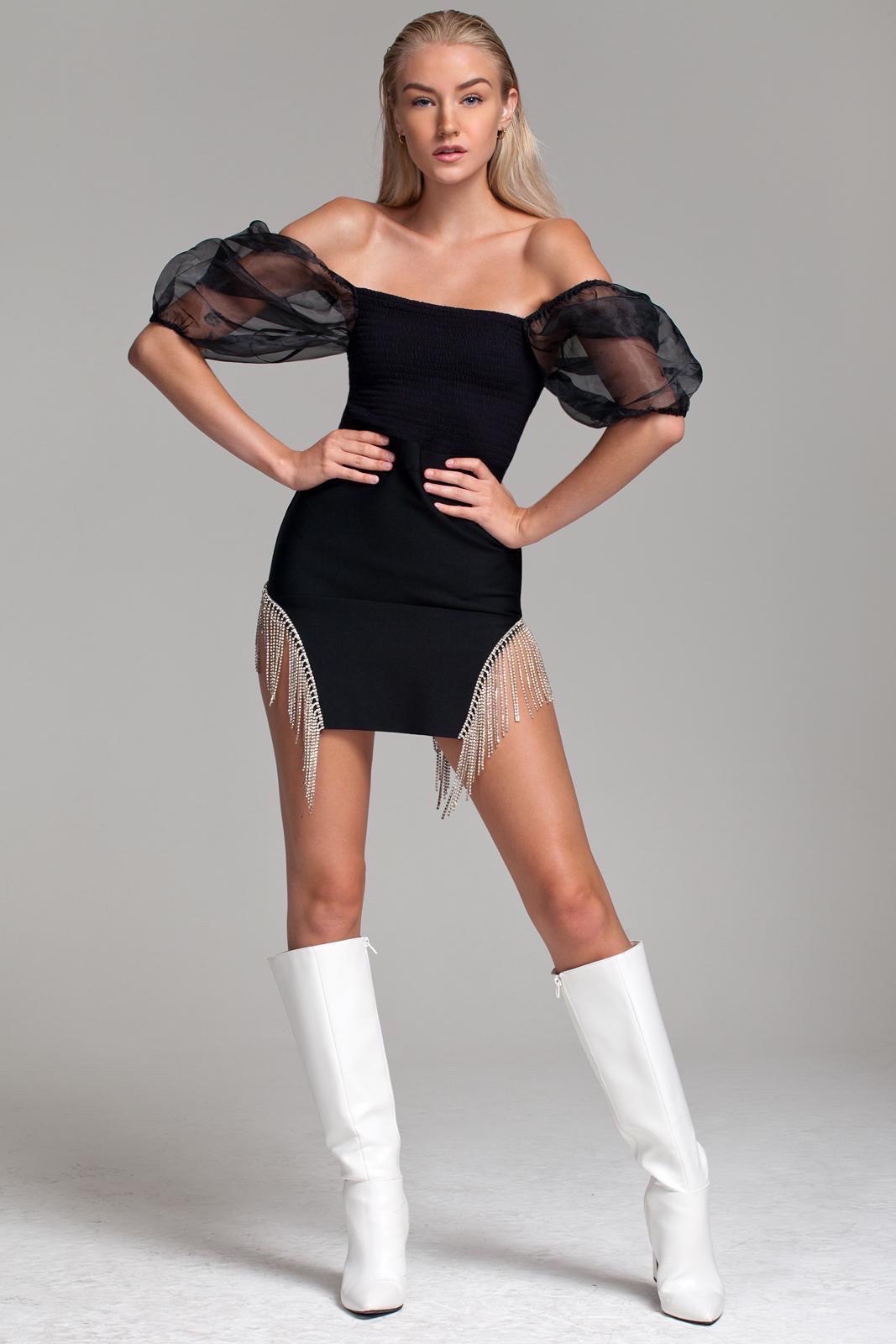 From posting on Instagram to the runway, professional editor and retoucher Alexandra West will be walking at DFW for the first time this season. In high school, West often modeled in small shoots with her friends for social media purposes. Her modeling career began to take shape when she was scouted through Instagram by talent scout Alain Camporiva in the summer of 2021.

West and Camporiva worked together on a variety of different projects including swimwear, streetwear and studio shoots. It was once West started working with World Management that her runway career took shape and she took the catwalk for the first time at Fierce in The City 5 on December 11, produced by Salwa Owens.

READ: Fierce in the City 5 Celebrated Fashion and Creativity

Walking at DFW is a dream come true for West, especially considering the journey leading up to it.

“My journey consisted of some self-doubt before modeling really took off for me,” said West. “It was very challenging for me at first and brought my confidence down significantly as I thought that I’m not good enough. I then decided to focus back on myself and school and to let the timing do its thing … Soon enough, I was scouted by a photographer via Instagram and since then I have never felt so grateful for my journey and what it has done for me now.”

West will be walking for Tara Hari Couture on April 6 at Void Studios and for Columbia Sportswear presented by the Outlets at Castle Rock on April 10 at the Forney Museum of Transportation. When she learned that she was cast to walk at the Local Couture and Lifestyle nights of DFW, West felt that all her hard work had paid off.

“Telling all my friends and family was one of the highlights of this process as I couldn’t be anymore prouder of where I am at with my career today,” she said.

Especially in Denver’s niche fashion scene, it isn’t easy to obtain modeling opportunities. West’s advice to aspiring models is to remain confident in themselves and their abilities. After all, her perseverance is what lead to the opportunity to walk at DFW.

“The advice I would give to future models is to be kind to yourself and to trust the timing,” she said. “After taking a break and letting it go for a while, it finally came to me for once. It mentally felt so much better than putting myself down after not receiving a callback or being with an agency. Trusting the process and manifesting what you truly want within your life is key to making your dreams come true.”

DFW is only the beginning for West. She hopes to one day model internationally, whether that be in runway shows or for photoshoots. While the fashion industry may seem daunting, taking opportunities like DFW allows models like West to break through the barriers that they may have faced before.

For those interested in pursuing modeling professionally, West believes the only way to feel fulfilled is to go for it.

“Make connections with those who are within the modeling world but also be smart about it. Get opinions or advice from those who have been in the industry and remember to give it time. Be kind to yourself and pursue what you truly want,” she said. 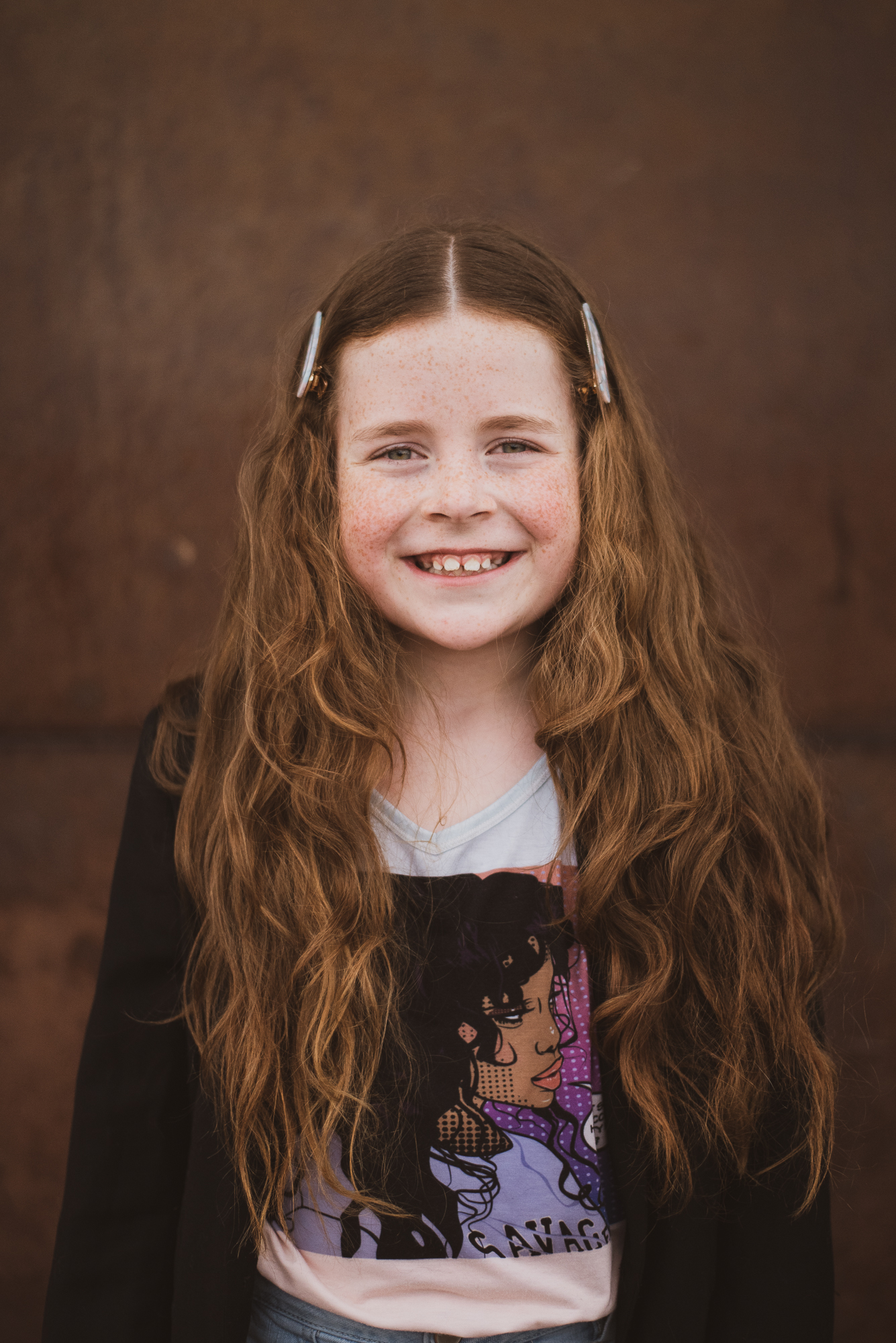 While there are a variety of new ventures in terms of Denver Fashion Week this season, one of which is the Kids Couture show on April 3 at Void Studios. For the first time in DFW history, kids ages 8 and up will be modeling collections from Factory Fashion and Saint Ida.

Reegan Chance Romero is one of the youngsters that will be taking the stage this season. At 9 years old, this is her first time modeling for a runway show. She will be walking for both Saint Ida on April 3 and Nike presented by the Outlets at Castle Rock on April 10 at the Forney Museum of Transportation.

For Romero, walking at DFW is an opportunity that most kids her age don’t get. While the casting process was somewhat intimidating, she felt eager to be involved nonetheless.

“When I went to auditions I felt ‘nerv-cited’ … like nervous/excited,” she said. However, the feeling of walking down the runway made everything seem worth it. “When you walk on the runway, it is all about confidence … ‘yeaaaaa.’”

Romero aspires to be a fashion designer one day and looks at DFW as an opportunity to understand the industry.

“I have always been interested in fashion because designers need models to model their clothes … and I thought it would be cool to figure out what that was like. This gives me experience in the same industry as fashion designers,” she said.

Like other models strutting the catwalk for the first time this season, Spring 2022 DFW is only the beginning for Romero. Immersing herself in the fashion industry and gaining valuable experience at this age is what will set her apart in the future. Although for the time being, that’s the least of her worries.

“I don’t know what the future looks like, but some part of me knows that it will be good,” Romero added. 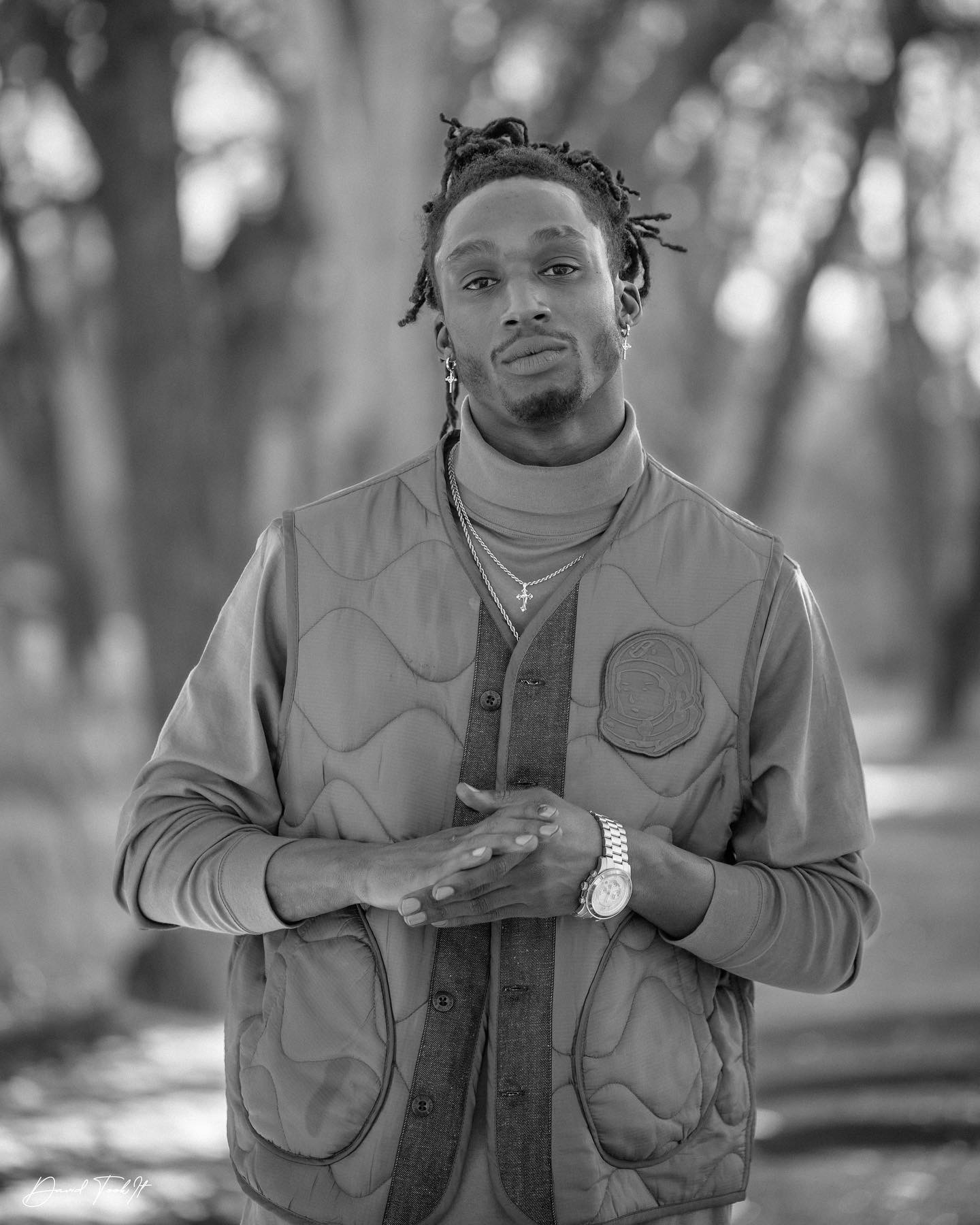 Photo by David Took It

Tyshawn Nicholas works as an Electrician Apprentice for the International Brotherhood of Electrical Workers (IBEW) Local 12 in Pueblo, Colorado. He’s always been a presence in front of the camera, so naturally, he began modeling in 2022. DFW will be Nicholas’ first runway experience.

The modeling industry is an entirely new realm for Nicholas, but he’s overjoyed to be a part of it.

“The journey thus far has been amazing. It’s something I have always wanted to do and being able to participate in shows like DFW is the cake,” he said.

Nicholas will be walking for several designers throughout this season’s week-long event, including KetiVani on April 5, Gulosch on April 9, and the Outlets at Castle Rock on April 10.

Walking for KetiVani seems surreal for Nicholas and “that’s the one I’m looking forward to the most – she designs mostly for females and usually has female models,” he said. However, she is currently working on a custom piece for Nicholas as a male model.

Nicholas is also excited about the opportunity to work with designer Scooter James of Gulosch Garments. “He’s coming with that more urban feel and he has a lot of dope designs,” Nicholas added.

For those who hope to be in Nicholas’ shoes one day by taking Denver’s runway by storm, Nicholas finds it important to prioritize self-love in order to be successful.

“Anyone aspiring to do anything … do what makes you happy. Loving yourself is key and having a vision of the future you want and understanding every day that the route to that vision is going to change but the vision needs to stay the same,” he said. 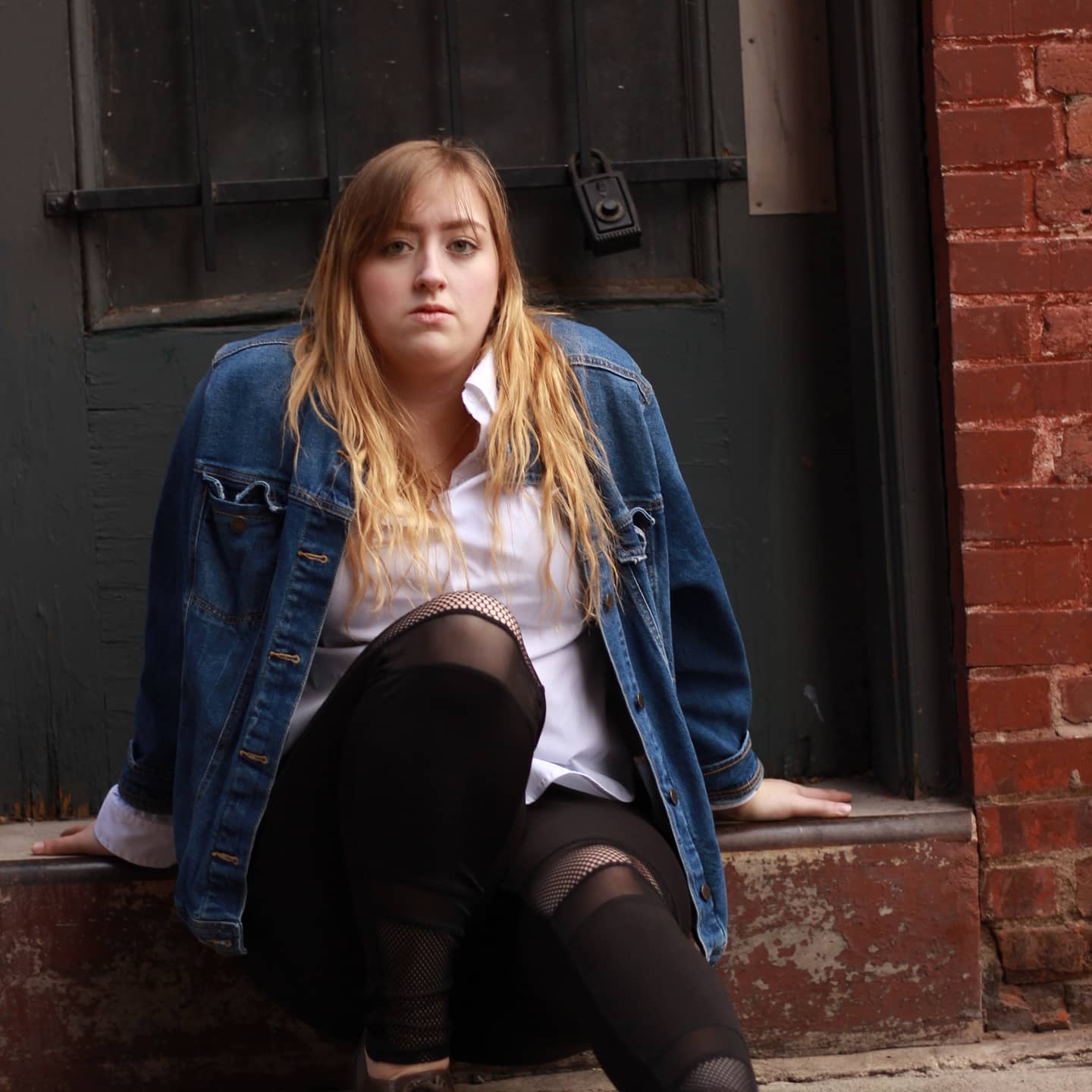 Saige Rasmussen is also new to the modeling industry but is eager to take the runway at DFW this season. While this will be her second runway opportunity, she is still learning to navigate modeling in a runway setting.

Rasmussen signed with her agency several years ago, although a complicated illness prevented her from modeling this past year. Due to a complex septated cystic tumor, she began to experience low self-esteem and depression.

“I had gained a bunch of weight and I thought modeling was out of the cards for me. I no longer had the confidence, nor the energy,” she said.

In spite of this, Rasmussen’s perspective changed when she attended a friend’s fashion show and began to see a future in modeling for herself.

“I saw a couple of different ladies walk and it really sparked something in me. I remember going home and crying the whole night and then the next time an audition came up I went to it despite all my hesitations and sure enough, I got cast,” she explained.

Although DFW casting proved to be a stressful experience, Rasmussen was comforted by familiar faces within her agency.

“I got to walk down the runway during the first audition with two of my friends from my own agency so that was really comforting that we all had each other and it was even more exciting that we all got it,” she said.

Rasmussen will be walking for Kilo Brava during the DFW Streetwear night on April 4. While the future is yet to be written for her, Rasmussen is excited to build a network of connections in walking at DFW.  One day, she hopes to walk in world-renowned runway shows like New York or Paris Fashion Week.

Overall, the opportunity to walk at DFW is a pillar in Rasmussen’s modeling experience. While she still considers herself an aspiring model, this is a huge step in reaching goals that she has aimed to accomplish.

“I am so thankful and in awe. I feel like I am dreaming and I’ll be sad when it’s over. But I’m also so excited to see where it’ll go,” she said. “If I had any advice to give out to anyone it would be to just be kind to yourself and remember any no’s you get from anyone is not personal and to view those as business decisions and not as a direct reflection of your own beauty or self-worth.”

To experience these four models on the runway first-hand, purchase tickets for any of the DFW runway shows on the official Denver Fashion Week website.

Updated on March 25 to correct a photographer and brand name.